**Rare, late 50's or early 60's Original** Excellent original condition Hofner Club 60 electric guitar in full working condition. Plays beautifully with a superb action. Not many of these around in this condition. Supplied in the original case(well used and no handle).Commission Sale

More information about the Hofner Club 60

The Club series of guitars are probably those most considered to be the Hofners that helped the early British rock heroes in their early careers. Photographs abound of John Lennon, Paul McCartney, Dave Gilmour, Justin Haywood, etc. clutching a Hofner Club in their youth. The Club was considered by most young guitarists in the late 50s to be the "business", until they were weaned away by such modern developments as the Futurama III or, if really lucky, an American guitar!

There were three Club models to choose from in those days; the Club 40 with one pickup and modest timbers and ornamentation. The Club 50 was its two pickup equivalent, but the real McCoy was the Club 60, with beautiful flamed timbers, ebony fingerboard, and extravagant inlay work to headstock and neck. There was a Club 70 later on (1968), but this did not have the same charisma as the original models.

Despite a resemblance, in shape and size, to the Gibson Les Paul, the Clubs were of hollow construction using laminated timbers, and hence considerably lighter than the Les Paul. The tops were finished with spruce and back/sides flame maple, the two-part back being book-matched on the 60. Although the top was arched, the back was flat; again possibly an attempt to emulate the looks of the Les Paul? The usual Hofner blonde (natural) and brunette (sunburst) finishes were offered on all Club versions. The neck on the Club 60 is of five-part construction, maple/mahogany/beech/mahogany/maple, capped off with an ebony fingerboard. A repair to the heel has been carried out at some time, but this has been well carried out and the heel is rock-solid.
Note the leather located ring on the neck heel in the above photo, fitted by Hofner in place of a conventional strap button. Presumably Club owners in those days could only aspire to either a saxophone neck strap or a dog lead to support their guitars!

The headstock is also ebony capped, as with all the other better quality Hofners, and has similar "vine leaf" mother of pearl inlays as on the President and Verithin. Up to around 1960, the Club 60 had a very nice slim headstock as shown on the above photo. This was then unfortunately changed to the same width of head as the President, and indeed the Club 40/50, but still thank goodness retaining the ebony capping and inlays which the cheaper versions never possessed.

Single, open tuners of good quality have been fitted: these having brass tuning spindles and gears just like the President.

Three piece ornamental mother of pearl fret markers set in rosewood and celluloid strips have been inlayed into the ebony fingerboard. This ornamentation, in my view, is even more lavish than on my 1965 Committee, which has not been given the rosewood strips.

The black bar pre-1960 bridge pickup is shown above, with one of the height adjustment wheels clearly visible. The bridge is the Hofner ebony (or maple ebonised!) type which was fitted to all Clubs. This provides a degree of string inotation adjustment by means of the fret wire saddles which can be located in any of the four slots on top of the bridge unit.

The classic Hofner two volume control panel is fitted, with slider switches for each pickup and Rhythm/Solo. As with the President, the on-off switch and volume rotary control for each pick-up dont correspond in location on the panel, and this, together with lack of markings on the panel, lead to major problems when attempting to make a quick on-stage adjustments!

The tailpiece, made of nickel plated brass and various gauges of rod is as on all Clubs, although some had a small circular logo soldered to the wires in the centre of the tailpiece. The famous Violin Bass has a similar unit fitted, but of course with only four string holes. 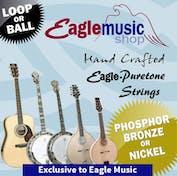 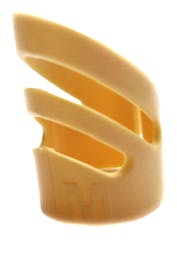 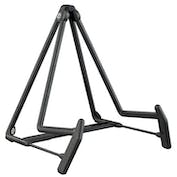 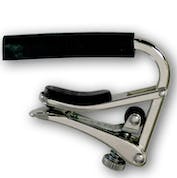